In the News
Examples of work we've done 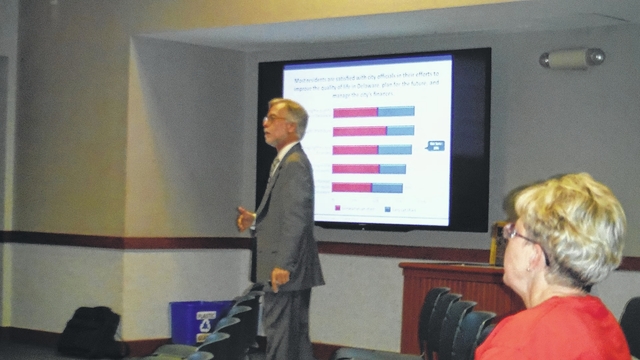 Marty Saperstein presents the results of a public opinion survey to City Council on Monday.

Ninety-four percent of residents believe that the city of Delaware is heading in the right direction, according to a recent survey.

Marty Saperstein of Saperstein Associates, Inc. presented the findings of his “Community Attitudes Survey” to Delaware City Council before its regular meeting Monday.

In terms of priorities for local public officials, residents listed traffic congestion; education/city schools; street repair; crime/drugs; managing growth; and downtown development. However, “none was mentioned by more than one resident in five or dominated the responses,” Saperstein said.

Saperstein said it was unusual that the Delaware respondents favored economic development over infrastructure, and that eight out of 10 would even consider paying higher taxes to fund high-priority initiatives. Three of five people felt the pace of commercial and residential development was appropriate.

The survey said eight of 10 residents were satisfied with how city officials are making Delaware a sustainable city through recycling, energy efficiency, and the use of land and water.

Among the other findings: Adults have lived in Delaware an average of 19 years, and 63 percent expect to remain in the city for at least the next five years.

“Excluding family and friends, a plurality of residents get most of their news and information about Delaware from the Delaware Gazette,” was one of the survey findings. However, younger residents favored getting their news in digital formats. Seven out of 10 residents has a Facebook account, and 36 percent have been to the city’s Facebook page; while 16 percent have a Twitter account, and only 5 percent follow the city on Twitter.

The survey was conducted in May by making more than 10,000 calls on landlines and cellphones to reach more than 400 registered voters. The surveys averaged 17 minutes in length. The margin of error is 4.9 percent.

Council is expected to have a work session to assess how the survey results tie in with what council members have identified as priorities.

Prev Post
Next Post
Much of the research SAI conducts is cited in print and digital media.